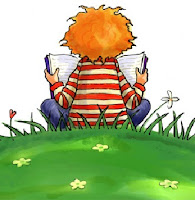 So, I have quite a few summer 'goals' and I thought I'd share them with you.

Have you any goals for the summer? Let me know in the comments.