The Girl on the Stairs by Louise Welsh 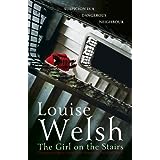 
Jane Logan is six months pregnant and has moved to Berlin to live with her long-term lover, rich banker, Petra. The women's chic new apartment is in a trendy part of the city but Jane finds herself increasingly uneasy there. She conceives a dread of the derelict backhouse across the courtyard and begins to suspect something sinister is happening in the flat next door, where gynaecologist Alban Mann lives with his teenage daughter Anna. Petra believes her lover's pregnancy is affecting her judgement, but Jane is increasingly convinced that all is not well. Her decision to turn detective has devastating results when her own past collides with the past of the building and its inhabitants. A haunting, atmospheric novel from the acclaimed author of The Cutting Room. - Book Depository


This book wasn't what I was expecting. The blurb on the back was a lot more vague than the summary on Book Depository. I was expecting some sort of horror/mystery but what I got was a very dull mystery. It got 3 stars mostly because the characters were interesting and well developed and also the writing was great.

It was very clear of the roles in this lesbian relationship. Petra was out working, gaining income for Jane and the soon to be born child whilst Jane was staying at home which she conveniently found time to 'investigate'. That was one thing I found a little annoying and also stereotypical of the male/female roles in the typical, heterosexual household.

The character development was great. I liked both Jane and Petra from the beginning but nearing the end I found myself slightly annoyed with Petra. Anna and her father also developed well.

From the beginning it was all very ominous and the suspense and mystery was built up gradually in a very well done manner. Though, I was a bit let down when I found out what the mystery was. I don't understand why Jane would care so much about a seemingly rude and ignorant thirteen year old girl so much! But that aside, the mystery was written appropriately for a mystery novel.

The writing was great. There was a lot of nice descriptions and metaphors which I love. Though, sometimes the metaphors were slightly exaggerated which irked me a little: "She pulled the pink scarf from a drawer and twisted it into a complicated knot." Since when do scarves have complicated knots? Generally it's a simple knot (if you would even call it a knot). I know I'm being picky but there was many more examples I found which I failed to take note of/remember.

The suspense and mystery did not drop for a second in this book. There was always questions being asked and answers but yet there was still more unanswered questions. It kept me guessing throughout.

The ending (the last 20 or so pages) was very fast paced and engaging. I found myself not wanting to put the book down for a second. There was also a great twist at the end too.

Overall I thought this was a decent mystery but it was far too short and lacking in depth. It was too straightforward. Also I found it a little tedious; why was Jane so obsessed with finding the answer to this mystery? Why should she care?

Anyone who likes basic mystery novels should definitely pick this up. (Though, it's no Agatha Christie!)

Thanks to John Murray Publishers (imprint of Hodder) for supplying me this book for review.
Posted by Lauren at 10:45